As you can see below, the third-best one-day return occurred only two days after the worst one-day return (stock market crash of 1987). Most investors who bailed out of the markets in response to the crash would have missed a significant bounce back. 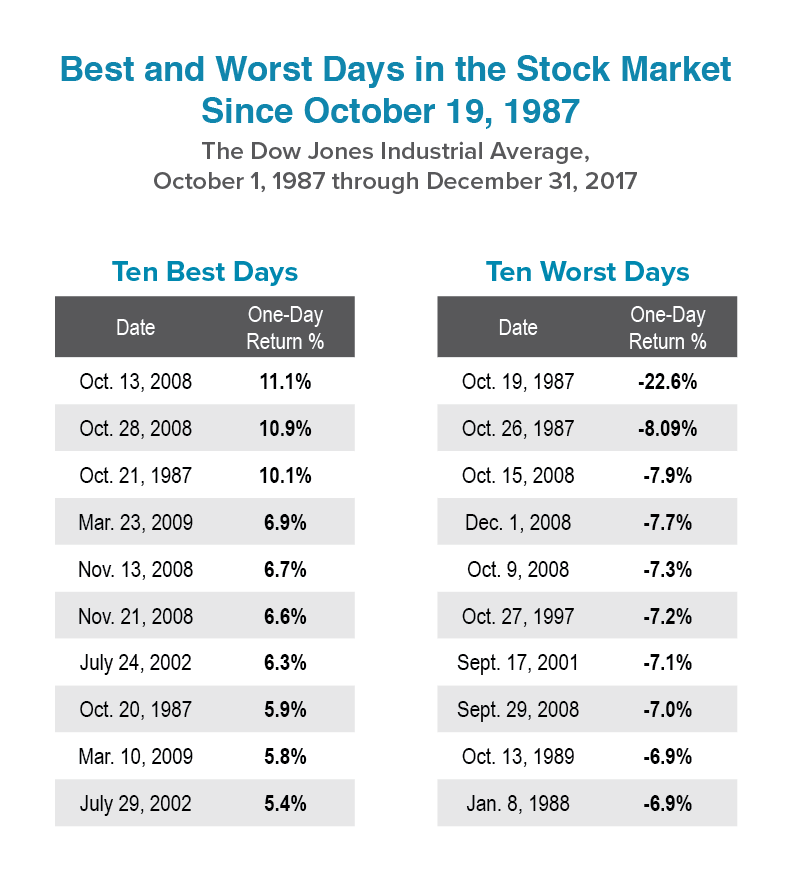 Source: Morningstar Direct, March 2018 The Dow Jones Industrial Average is a price-weighted average of 30 actively-traded blue chip stocks. The Index does not incur or include trading or other costs. Indexes are unmanaged baskets of securities that investors cannot directly invest in. Past performance is not a guarantee of future results.

Already this year we have seen another example of large losses followed quickly by large gains: In the first nine days of February the S&P 500 dropped 10% from January’s highs, but since then has sprung back 8.4% (as of March 2, 2018).1

Of course, it’s tempting to think about what would happen if you could avoid the market’s worst days. But are you agile enough to avoid those worst days year in and year out for several decades? And after you’ve avoided those down days, are you also astute enough to get back into the market in time to catch the next big “up” day?

To test yourself, answer the following questions:

1) How was my portfolio allocated on October 15, 2008? On that day, the S&P 500 plummeted 9% — one of its worst single-day performances in the past 40 years. Did you see that day coming and shift your portfolio out of U.S. stocks to avoid the damage? Or did it hit you unexpectedly?

2) How was my portfolio allocated on October 28, 2008? On that date — just 13 days after one of the S&P 500’s worst single-day performances — the index delivered one of its best single-day performances, soaring 10.8%. Think back. Did you know that was about to happen and did you get back into stocks or increase your allocation to stocks? Or were you, like most other investors, still worried about the possibility of a global financial meltdown?

If you got it wrong, don’t feel badly: You had plenty of company. Investors often get nervous or impatient and break their discipline — typically at exactly the wrong times.

Since no one can accurately predict when markets rise and fall, we believe it is wise to take a long-term view of your portfolio, tune out the media noise, and adhere to your investment plan regardless of where the stock market is headed short term.